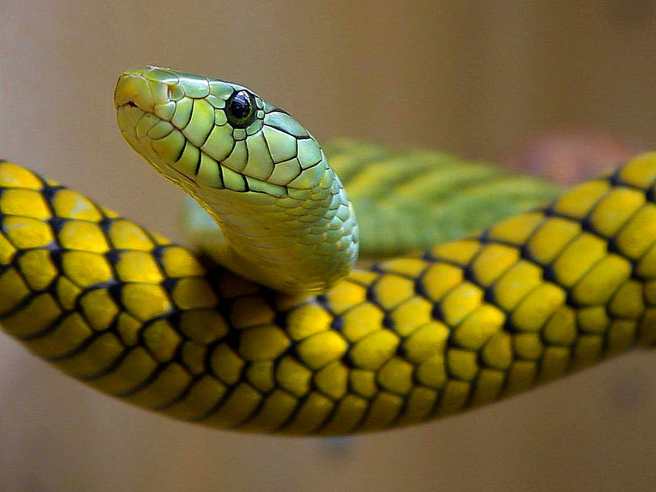 This is a short piece inspired by another Reddit post at r/WritingPrompts: Medusa, the mythological monster is real! But not in the way you think, she’s actually just a normal female adult with snakes for hair.

It’s clear she’s used to being stared at; she’s focusing hard on the screen of her tablet, feigning interest in an ebook, but I haven’t seen her swipe to turn the page since she got on. The seats to either side of her are empty – room left for the live snakes on her head to wind and turn, exploring the space like bored children, looking at passengers as if it were just another day. Their black, shiny backs and smooth yellow bellies give the girl an almost cartoonish look, but their scales and flicking tongues offer a balance to the effect.

One of the snakes moves sideways, the s-curve of its body reversing as it slips into her face, appearing to read the tablet screen. Annoyed, she brushes it away, tucking it behind her ear, where it remains only a moment before sliding free to explore the top of her head.

I’m intrigued, but pretty unsurprised. Nothing surprises me anymore on the subway. The other people in our car seem to be of the same mindset. Everyone who has seen her and looked horrified, has simply switched cars.

What I’m intrigued by, and I really don’t mean to stare, is that I can’t tell where the snakes’ tails are. In fact, if I’m not mistaken, which I very well could be since I’m across the car and a few seats over, it seems as if the snakes have no tails at all, but are rather attached to her scalp around a foot and a half below their heads. Fascinating. I wonder how they stay alive, but am unsure as to whether it’s rude to ask. I’d hate to be rude, and I’m already staring. I decide to find something else to look at before she notices.

The subway reaches my stop, and I get up to leave, but snake-girl doesn’t. I hesitate, curious to know where her stop is, where she is going, but it’s my turn to cook dinner tonight, so I can’t be late. I hustle through the doors just in time, and watch the snakes on the back of her head watch me as they continue on to wherever it is their host is going.

I tell my family about snake-girl as we sit around the dinner table. It barely registers with the kids, who simply raise their eyebrows without raising their eyes from their plates. “Cool,” they say, nodding and trying to scarf their food down quickly so dinner will be over and they can get back to their electronics.

My wife stares at me. I shrug.

“You’re kidding, right?” she asks. “You’re just trying to see if the kids are paying attention.”

“I’m paying attention,” my oldest looks up, “he saw a lady with snakes for hair, so what?”

“So what?” Wife is incredulous. “Isn’t it at least a little bit unusual?”

Oldest shrugs, and goes back to scarfing down food. Wife looks at me again, but I shrug, too.

“Well, what happened?” she asked.

“With the snake girl.”

“Were the snakes real?”

“Yeah, I’m pretty sure they were.”

“Did she say or do anything?”

“No, just sat there, reading a book.”

“And nobody said anything to her?”

Wife sighs a loud sigh, and puts her face into her hands.

“We really have to get out of the city more often,” she says.

Later that night, Wife calls me over to look at something on her laptop.

“Check it out,” she says. “I did some searching and found your snake girl. She’s a famous sculptor. Works with stone. Real life-like stuff.” And indeed, there is a gallery on the screen of hundreds of animals and people, seemingly caught in countless positions both at rest and in motion. Fur, clothing, and musculature masterfully replicated in too many species to count.

My eyes rest on one of a man, sitting on a replica subway seat, looking up over the top of a newspaper and staring right at me. I feel a chill, but shake my head and it fades.

“She’s talented,” I say. “What does it say about the snakes?”

“Snakes? How can you look at all this talent and wonder about some stupid snakes? This woman has a gift!”

“If you see her on the subway tomorrow, ask for an autograph or something,” she smiles.

Sex educator and writer by day, poet and flash fiction author by night, I occasionally manage to get out of the house to enjoy New Orleans as it's meant to be. View all posts by Shannon Burton